Very rarely has one supplement inspired so much excitement and so much skepticism, as cannabidiol (CBD oil). From early adopters and marketers to serious researchers, the fans of cannabis are touting benefits for all kinds of illnesses. The results of early studies are tantalizing: Scientists have now observed therapeutic benefits in everything from epilepsy to anxiety to neurological conditions like Parkinson’s. And they have only seen a few if any at all, side effects, which just may be the greatest promise in this age of pharmaceuticals that may bankrupt, addict, or even kill you. 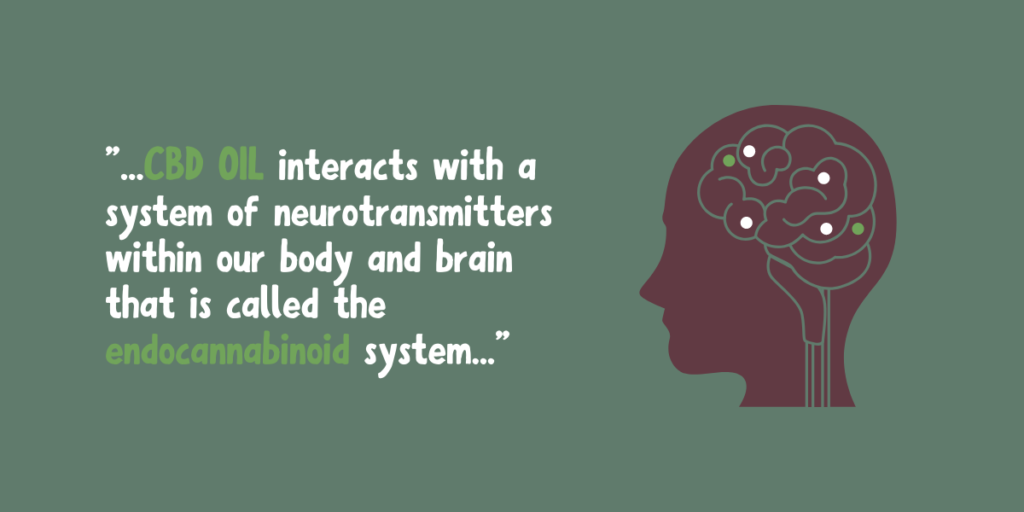 What we do actually know, is that CBD oil interacts with a system of neurotransmitters within our body and brain that is called the endocannabinoid system (ECS). Scientists has recognized that the ECS plays a very crucial role in all sorts of physiological functions, helping to regulate movement, pleasure, the gastrointestinal system, bone health, appetite, pain sensation, and seizures-just to name a few. The complicated ways, in which CBD oil influences the ECS make attractive for alleviating all sorts of symptoms and conditions. 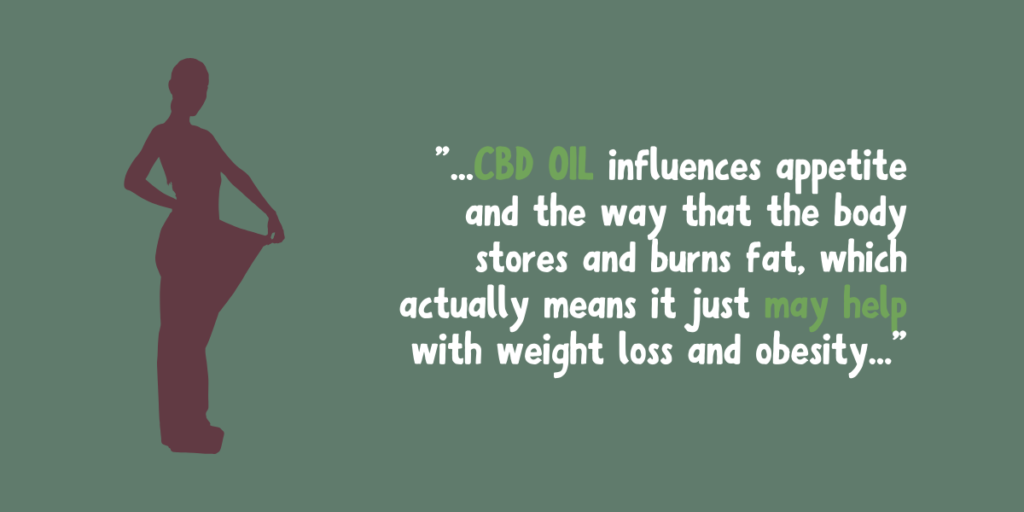 CBD oil can interfere with our brain activity that causes seizures, helping to control severe epilepsy (particularly in children). It interacts with the bodily systems that cause nausea and vomiting, gaining promise as a real treatment for cancer patients that are dealing with the side effects of chemotherapy. CBD oil influences appetite and the way that the body stores and burns fat, which actually means it just may help with weight loss and obesity. 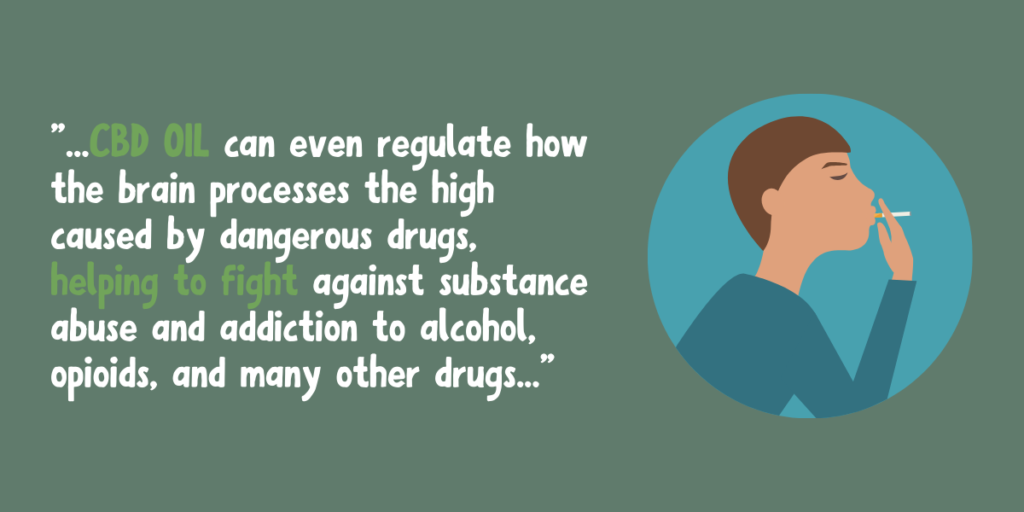 And yes my friends, CBD oil can even regulate how the brain processes the high caused by dangerous drugs, helping to fight against substance abuse and addiction to alcohol, opioids, and many other drugs. However, much more research is needed to build beyond-a-reasonable-doubt evidence of CBDs healing powers. There are some doctors that are unconvinced, claiming that CBD oil has, at the most, a psychosomatic benefit. What follows is a survey of the thinking and research that does exist for a range of maladies. If you indeed, suffer from any of these, take heart-however, consult a physician before you change your treatment regimen, as every type of CBD oil won’t work for every person or type of affliction, and some drug interactions are possible. 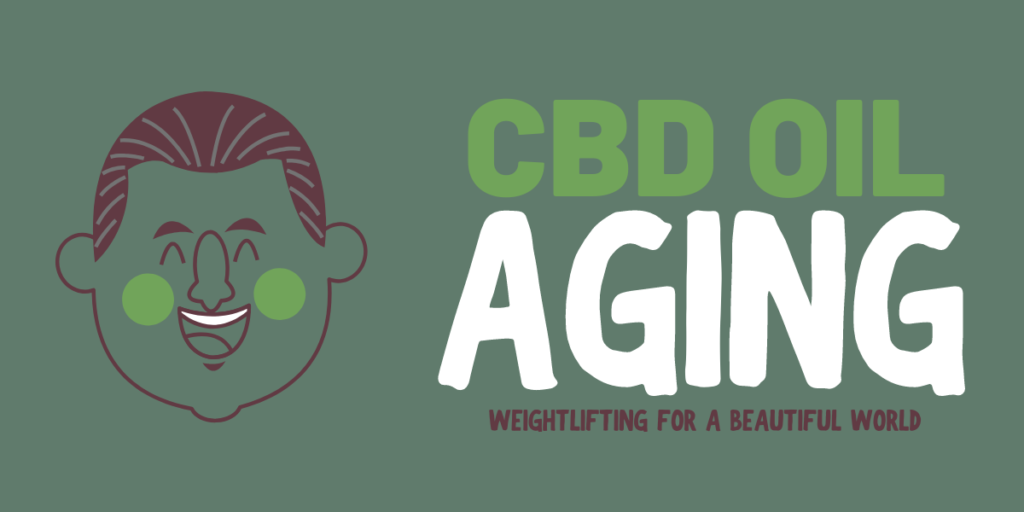 No one ever said getting older was going to be nice and easy. Thank goodness CBD oil can make senior life a little easier, by alleviating some very common health complaints. Creaky, painful joints? CBD oils anti-inflammatory, pain-fighting qualities have a lot of people turning to it for help with arthritis, (I was one of those people, all the medication that the doctors give me never helped arthritis in my left hand, after using My Daily Choice CBD oil in one week, the pain was gone.) A CBD-based drug had been shown to reduce pain from rheumatoid arthritis. There are some patients who are turning to CBD oil for relief from gout attacks. 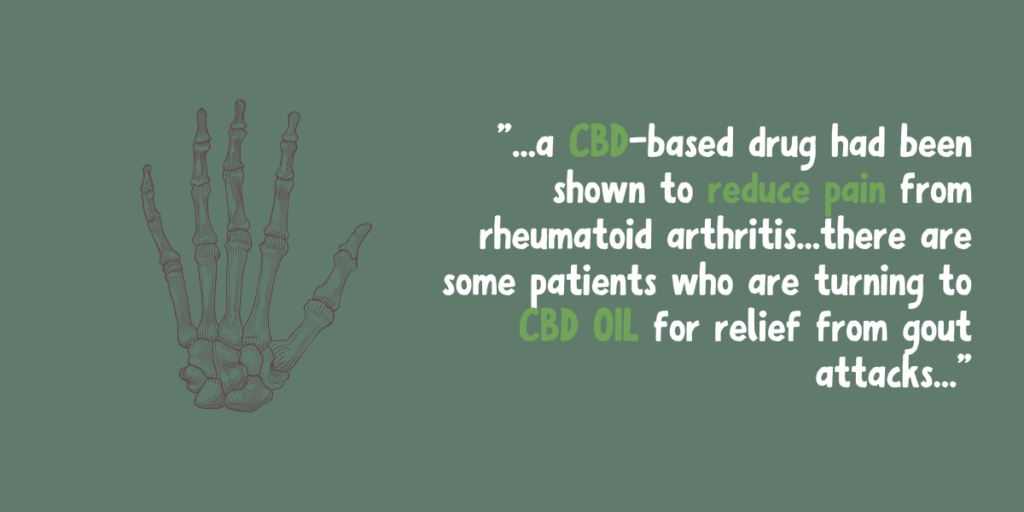 Promising research has actually singled out CBD oil as a potential treatment for Parkinson’s disease, because of its neuroprotective qualities. And among CBD oil, many other functions, the body’s endocannabinoid system plays a role in bone metabolism-which makes cannabinoids (CBD oil) a potentially attractive therapy for osteoporosis and also loss of bone mass. 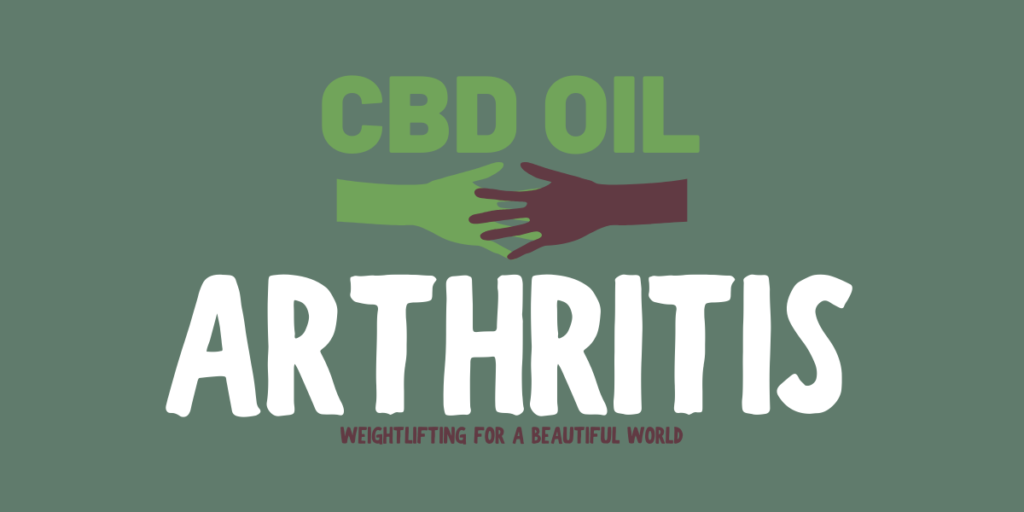 Stiff, inflamed, and those aching joints affect more than 48 million adults and 250,000 children in the U.S. In the most common form, osteoarthritis, which is the protective cartilage that is surrounding the joints, can wear away over the years, allowing the bones to rub against each other-a severely painful condition that keeps sufferers over and over from doing the activities that they love. Rheumatoid arthritis, on the other hand, is an autoimmune ugly disorder where the body will attack its own joints, however, the inflammation and pain are very similar. 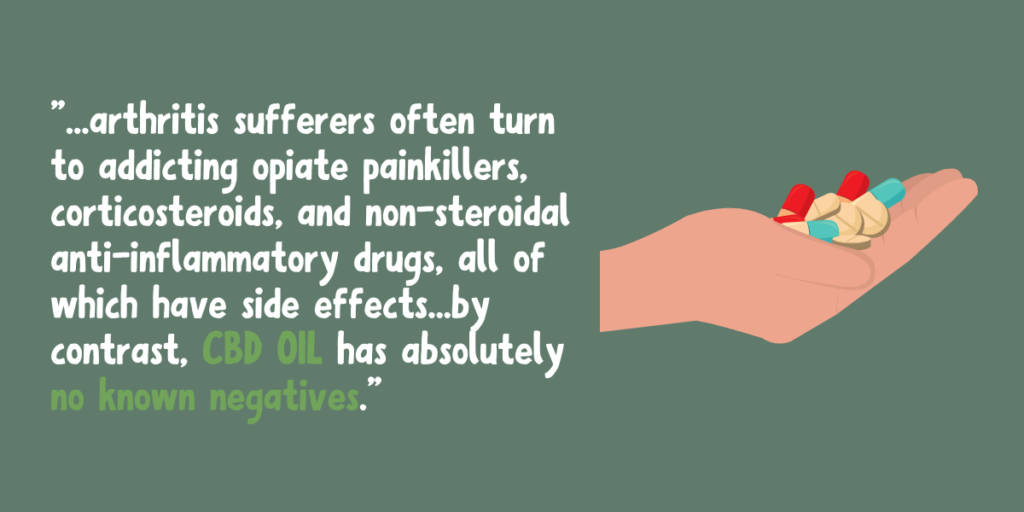 Arthritis sufferers often turn to addicting opiate painkillers, corticosteroids, (that hammers the liver) and non-steroidal anti-inflammatory drugs (NSAIDs), all of which have side effects ranging from damage to the kidneys, heart, and the stomach, to bone loss, to addiction.

However, by contrast, CBD oil has absolutely no known negatives. It tackles arthritis on two fronts- by mitigating pain and inflammation. CBD oil does this by activating the body’s endocannabinoid system, which regulates a number of physical processes, among them are pain sensitivity and inflammation. New studies suggest the benefits may not just stop there. 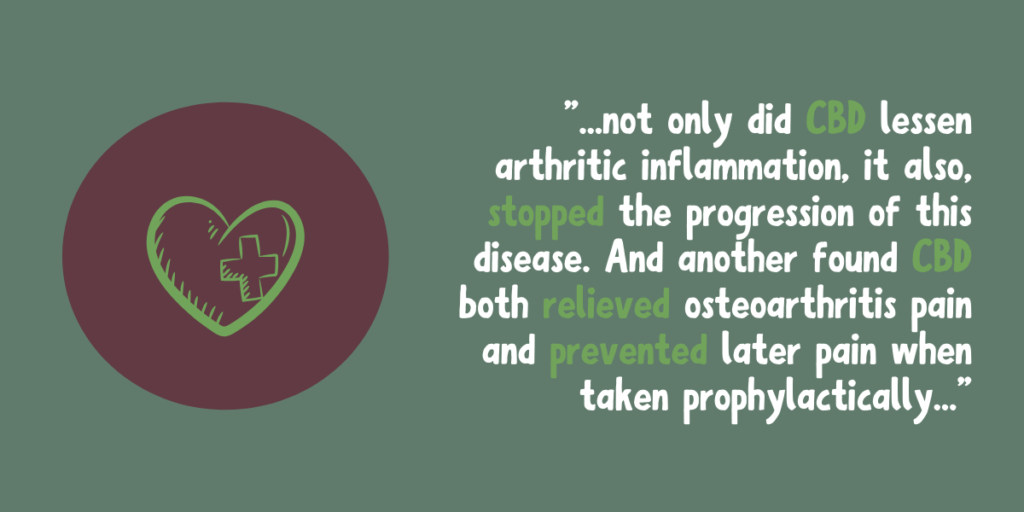 One reported that a topical CBD gel reduced the joint swelling and the pain without any side effects. Another observed that not only did CBD lessen arthritic inflammation, it also, stopped the progression of this disease. And another found CBD both relieved osteoarthritis pain and prevented later pain when taken prophylactically. Additional research shows how CBD OIL help with rheumatoid arthritis. All of this data comes from clinical trials of the drug nabiximols (the brand name is Sativex), which is approved in some countries for the treatment of the disease and is widely considered effective and very safe. 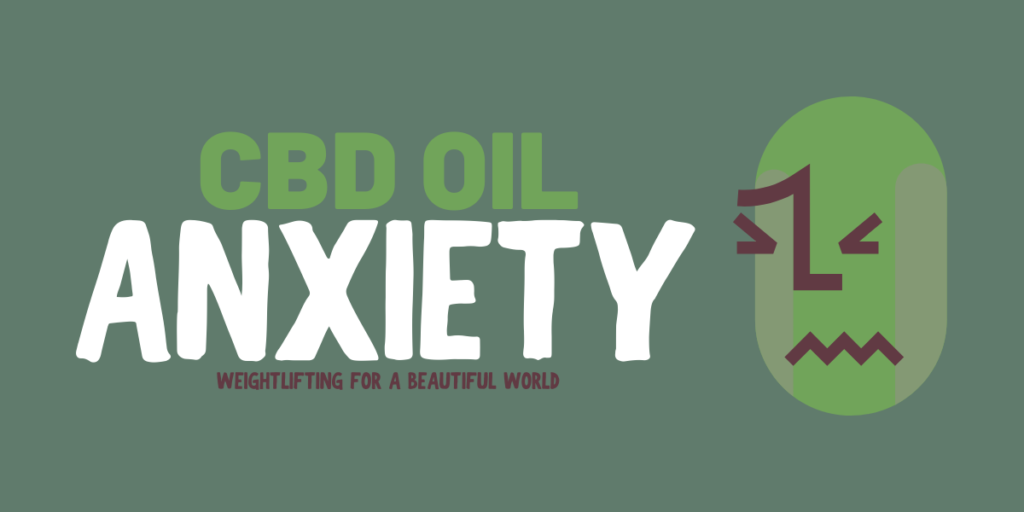 Sweaty hands, racing pulse: Unfortunately, everyone has been there at some point. However, an anxiety disorder goes well beyond the temporary nervousness that usually comes before a big presentation-it’s long-lasting and wreaks havoc on daily life. Whether it’s panic attacks (panic disorder), crippling fear about being around any other people (a social anxiety disorder), or feeling constantly worried and restless without any clear reason (generalized anxiety disorder), the realities of anxiety make it very hard to function normally and be able to enjoy life. 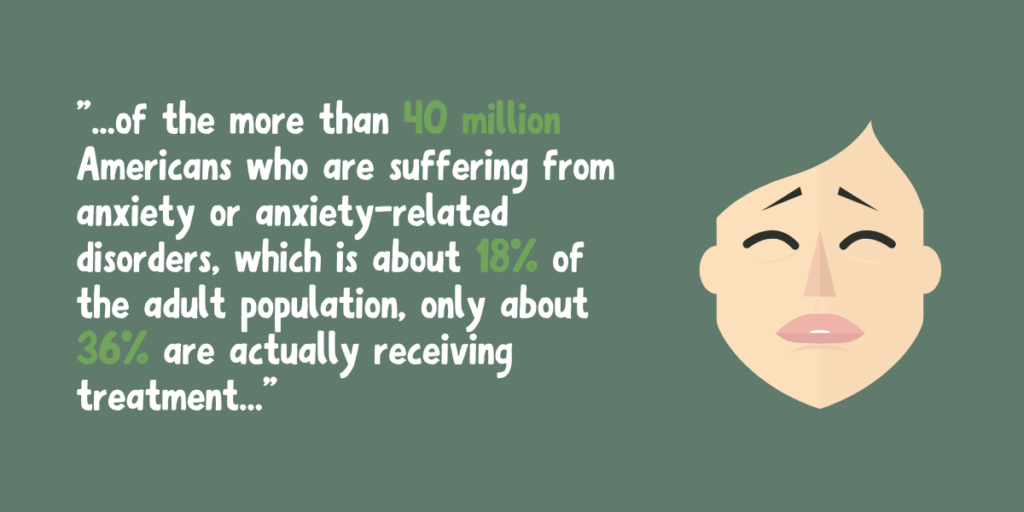 Unfortunately, anxiety can be very difficult for one to treat. Of the more than 40 million Americans who are suffering from anxiety or anxiety-related disorders, which is about 18% of the adult population, only about 36% are actually receiving treatment. Conventional treatment for anxiety disorders often includes very costly medications like benzodiazepines or antidepressants-drugs with some serious unwanted side effects such as weight gain, sexual dysfunction, insomnia, headaches, and, in the case of benzodiazepine, addiction (dependence). 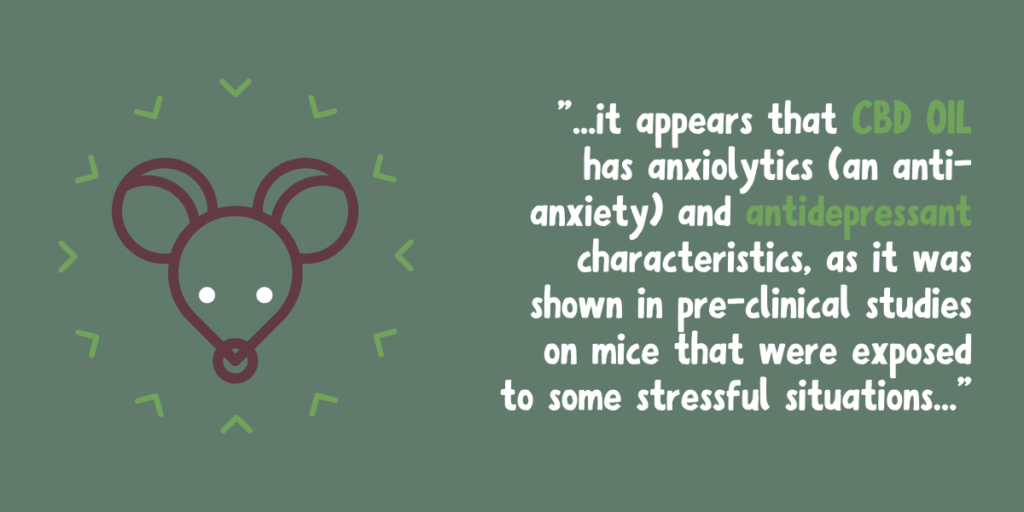 Anxiety and depression are thought to be caused in part by the lack of a very important chemical in our brain called serotonin. CBD oil has been shown to mimic the effect of serotonin in the brain, is capable of binding to and activating serotonin receptors (that is known as 5-HTIA receptors). And for this reason, it appears that CBD oil has anxiolytics (an anti-anxiety) and antidepressant characteristics, as it was shown in preclinical studies on mice that were exposed to some stressful situations. 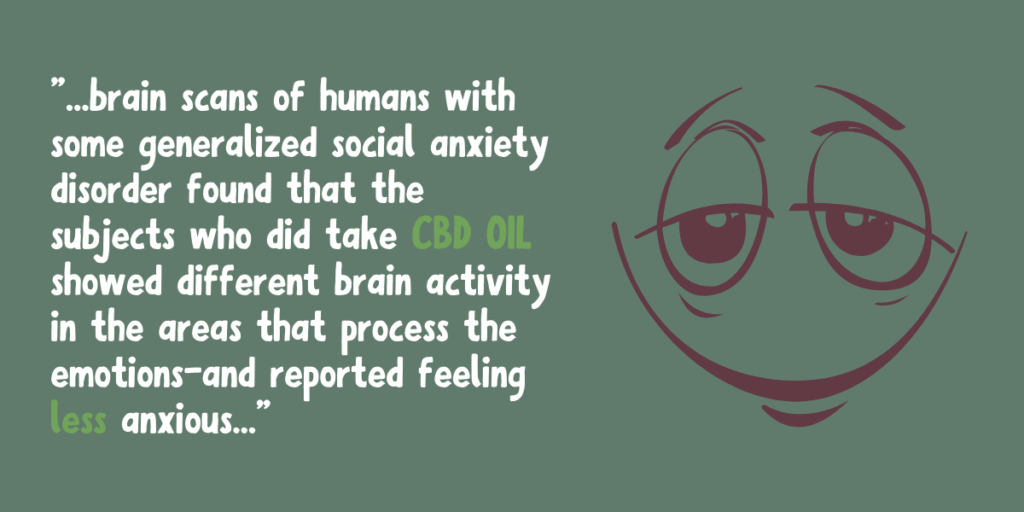 The evidence is accumulating that adding CBD oil to your routine can have some clear therapeutic benefit, with no side effects. Animal research that subjected mice to some stressful situations demonstrated that CBD oil had both anti-depressive and anti-anxiety characteristics. The brain scans of humans with some generalized social anxiety disorder found that the subjects who did take CBD oil showed different brain activity in the areas that process the emotions-and reported feeling less anxious. And another fascinating study had subjects with generalized social anxiety disorder perform a simulated public speaking test: all who took some CBD oil beforehand had way less anxiety, cognitive impairment, and discomfort that the placebo group.

Scientific and medical studies had also shown, that CBD oil helps with ADDICTION, DEPRESSION, EPILEPSY, NAUSEA, OBESITY, PAIN, PARKINSON’S, PTSD, and a whole host of other conditions. Yes indeed, studies have found that CBD oil does improve the quality of life. 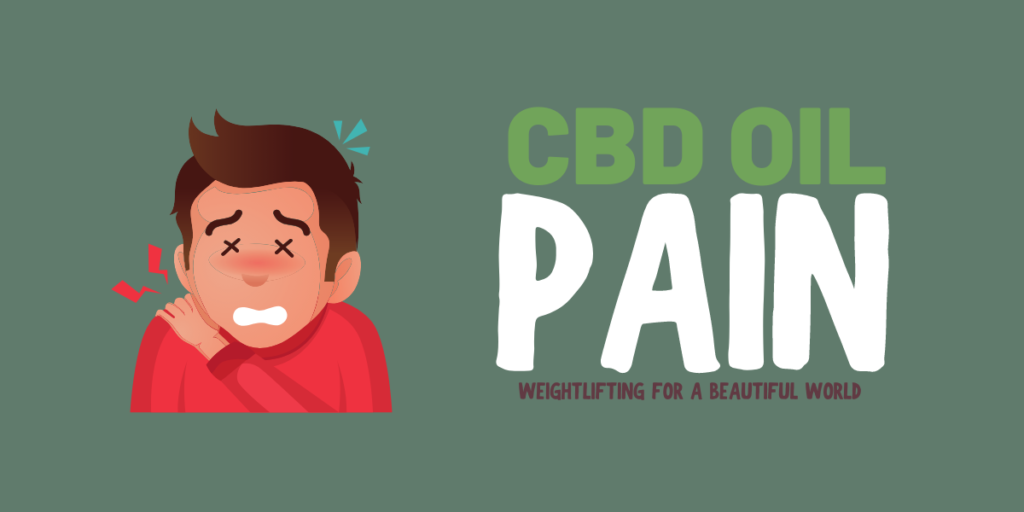 Whether you’re dealing with the aftermath of an injury, a recurring flare-up, or long-lasting, chronic suffering, pain interferes with your life, liberty, and the pursuit of happiness. However, CBD oil, can offer relief: A large number of studies have backed up CBD oils power to alleviate true pain related to multiple sclerosis, cancer, and inflammation, as well as neuropathic/ chronic pain. CBD products are now also being used to treat athletic pain and injury, muscle aches, back pain or sciatica-all of this without any side effects or addictive potential of opiate painkillers or any other drugs on the market. 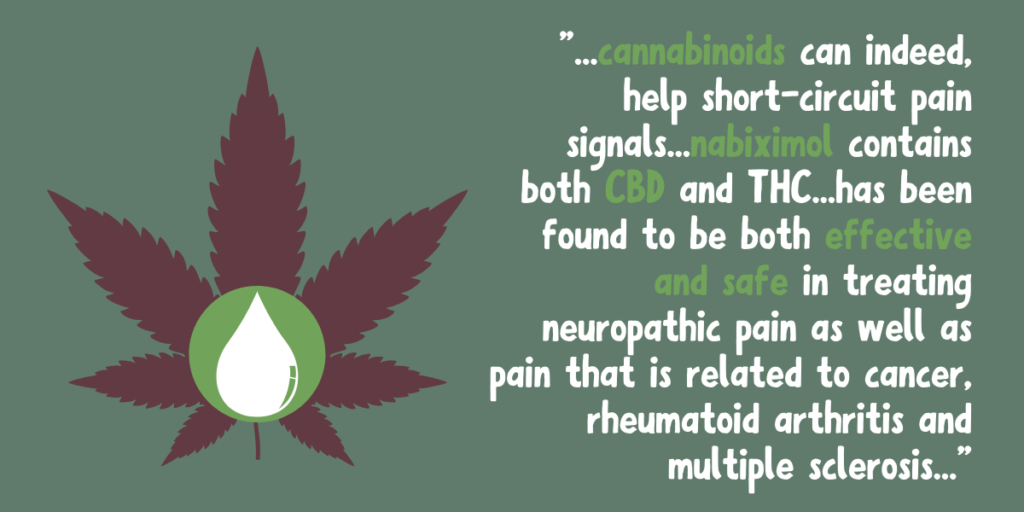 Scientists know the body’s endocannabinoid system plays a key role in how we process painful sensations, so perhaps, it’s not a surprise that cannabinoids can indeed, help short-circuit pain signals. The drug nabiximols (the brand name Sativex), that, contains both CBD and THC, has been widely studied in a very big way, and has been found to be both effective and safe in treating neuropathic pain (chronic pain that is related to the nervous system), as well as pain that is related to cancer, rheumatoid arthritis, also, multiple sclerosis. There are thirty countries, including Canada and much of Europe, have now approved Sativex (contains both CBD and THC) to treat chronic pain, rheumatoid arthritis, and cancer pain. 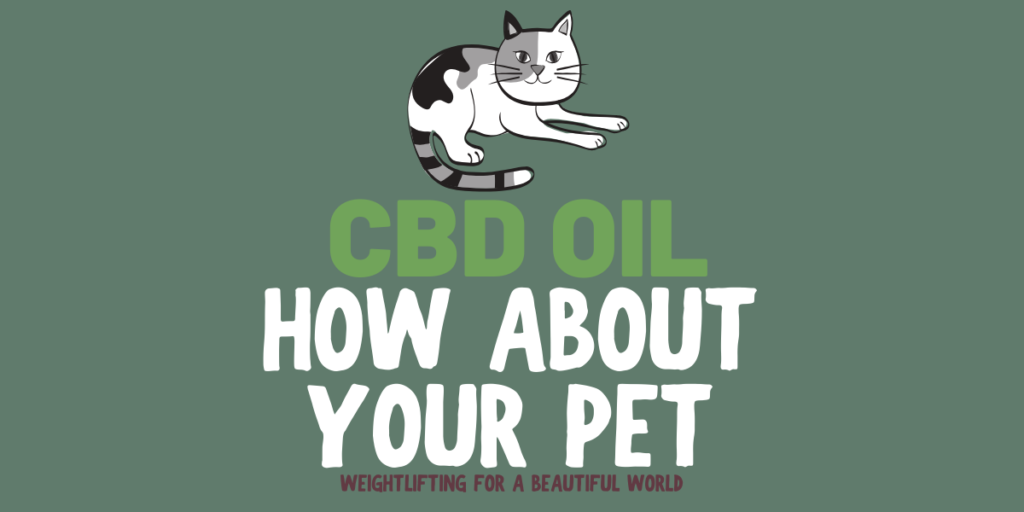 There are promising studies that show CBD’s benefits for cats, dogs, and horses. CBDs therapeutic powers for us humans are becoming more and more established: CBD oil is an effective anti-inflammatory, pain reliever, anti-nausea agent, and anti-anxiety compound. So might, man’s best friends have the same benefits? 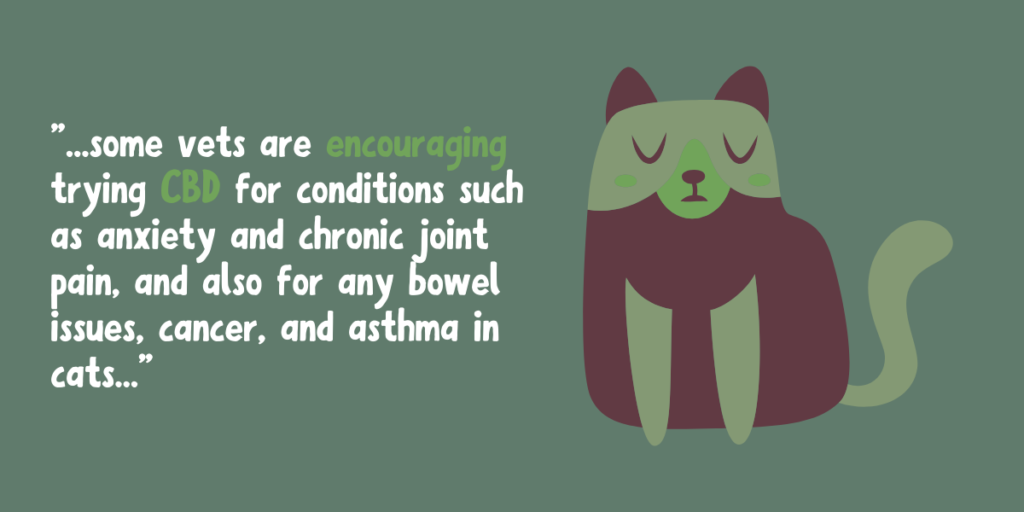 Veterinarians are now beginning to examine this important question. Though the research on CBD in animals lags behind human research, recent clinical trials have shown very positive results in treating epilepsy and osteoarthritis in man’s best friends (dogs). In a 2018 groundbreaking study from Cornell University reported both pain relief and increased activity in dogs with arthritis. The Colorado Veterinary Medical Association notes increasing interest among pet owners in CBD oil for chronic pain management and for cancer therapy. Some vets are encouraging trying CBD for conditions such as anxiety and chronic joint pain, and also for any bowel issues, cancer, and asthma in cats. And anecdotal evidence shows promise for the substance for treating some conditions like cancer pain in dogs, cats, and ligament disease in horses.

There is one company that you can trust, to have you covered in all of these areas and that company is My Daily Choice, (HempWorx). My Daily Choice products give you the right ingredients, proprietary formulas, and delivery systems to create a healthy environment within your body. CBD is in demand and that demand is growing very rapidly. Unfortunately, that means that the market is being flooded with imported and poor-quality CBD, HempWorx is different, HempWorx, work with a team of in-house scientists, botanists, geneticists, and they are a partner with state universities to ensure unmatched quality. All of their products are made in the USA: they control the supply chain from seed to sale. HempWorx is veterinarian recommended and tested to help every cat and dog in your life. For more information on this amazing company please, click the link below, and if you want to purchase NOW, there is also a link below. PS, I am also a client.