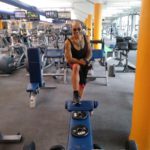 Weight lifting better for heart health than running, new study finds. Lifting weights is healthier for the heart than going for a run or a walk, new research has found.

Scientists looking at the health records of more than 4,000 people have concluded that, while forms of exercise reduce the risk of developing heart disease, static actives such as weight lifting or press-up have a greater effect than an equivalent amount of dynamic exercise such as running, walking or cycling.

The research challenges commonly held assumption that so-called cardiovascular pursuits like running are of greatest benefit to the heart.

However, it backs up previous studies which suggest that heavy static exercise gives the circulatory system a better workout because the oxygen expenditure is more intense.

May your workout be all that you want it to be.